Tonight I engaged in one of my favorite pastimes: watching late night Comedy Central whilst browsing the internet for interesting stuff to read. Colbert, with guest James Franco, did not disappoint. NPR, like it do, delivered. This:

The Sad, Beautiful Fact That We’re All Going To Miss Almost Everything

This title, plus an image of a book stack silhouetted against a blue sky, earned my click-through. The blog piece ponders the question, what does it mean to be “well read” in a time of unlimited information?
Hm…oddly enough, Colbert & Franco (along with his “brother” Frank Jameso…bahaha!) had a similar conversation about what it means to be an artist, including the quote, “the true aesthetic moment hangs in suspension between pornography and didacticism.” (Yeah, I wrote it down! Doesn’t everybody take notes whilst watching late night Comedy Central?)
They ponder the question, is James Franco really a “Renaissance Man” or is it an unfavorable sign of our times that pursuing a multiplicity interests makes a person something of an oddity?

I’ve often wondered about the limited number of books (and movies and podcasts and other media experiences of worth) I will be able to consume in one lifetime. I know one thing, the number is much too small to justify finishing the Twilight series. smileyface.

The author would accuse me of “culling” here, in rejecting Stephenie Meyer outright after one novel, rather than choosing “surrender,” which would mean I’m willing to accept the risk of missing out on something. I admire her optimism for what missing-out means: there’s just so much good stuff in the world, one person can’t possibly digest it all. (No matter how hard she tries…watching TV and reading blogs concurrently, for instance.)

Last night I saw Elton John, y’all. (Not a thing I ever imagined I’d say, frankly.) My brother works with a lady whose husband happens to be an Elton superfan, the kind of person who is serious about music in ways I am not. He saw the Grateful Dead 60+ times (sixty. six zero.) and has seen E.J. 5 or 6…you lose track after a while, I guess.

The show lasted almost 3 hours, and ol’ E.J. was on the whole time. He’s a 110% performer, getting up between songs to point to the cheap seats and bow and interact with the crowd. (In his tastefully fabulous bedazzled black suit, I might add.)

Before the show, my brother recalled a vivid memory of Dad singing “Crocodile Rock” in the driveway once, an unusually goofy moment for our otherwise straight-laced father. I’d also realized, while I straightened my hair to an all-Elton-iTunes-shuffle, that many Elton John songs evoke specific memories for me. Why? Because they’re catchy for sure, and they also happen to intersect with some evocative moments in life. Such as:

“Candle in the Wind”– Always makes me think of going to church camp in 5th grade. First time I was away from home for a week, and I didn’t take it too well. (For one thing, I was a shy kid. But in my defense, did you see Jesus Camp? Okay then.) This song was on the radio as we drove to meet the other kids at church early in the morning. The song felt very Brave and Meaningful, and even though I’m pretty sure I didn’t realize it was about Marilyn Monroe at the time, I connected the song with loneliness and soldiering on. Thanks, KGBX, for making this and other awkward tween moments more poignant for me.

“Mona Lisas & Mad Hatters”– This one reminds me of freshman year of college and my roommate, Jennie. I had a shiny new eMac for school, with the shiny new iTunes music store. (This was 2002. Back when this would have seemed way cool. Before people could carry iTunes in their pockets. Leave me alone.) Jennie would occasionally buy songs to make mixes and pay me back, so I have a fun assortment of songs on my computer from that time, including ML&MH. I hadn’t heard this one before college…so now I associate it with friendship and feeling grown up.

“Tiny Dancer”– This song will forever remind me of karaoke in Vietnam. Hanging with Team Awesome in our little private room (think Lost in Translation) with Tiger beer aplenty and awkwardly translated positive reinforcement on the screen: “Good Singer!”
Inexplicably, the lyrics were changed from “lay me down in sheets of linen” to “lay me down and she’s so glad.” I wonder whether this was a simple grammatical mistake or if there’s more behind it culturally. Perhaps linen sheets are a no-no in ‘Nam. or We don’t talk about bed sheets in Asia, dirty Western pop song. Fascinating.

“I Guess That’s Why They Call It the Blues”– Discovered more & more Elton John early in college, thanks in part to my concurrent obsession with Billy Joel. Both 2-disc Greatest Hits albums came into my life, and I discovered this song and its glorious doo-wop-iness. Associate it now with memories of my college long-distance boyfriend. Mix CDs and road trips to CMSU. *sigh*

“Don’t Let the Sun Go Down on Me”– You guys remember when Clay Aiken sang this on American Idol? I loved him so much. He is now so gay. That is all.

“Blessed”– Another memory of KGBX in the car with my parents. Only with this song I was not a fan. I remember even as a middle schooler thinking, man, some adult contemporary songs just SUCK!

Which brings us to “Bennie & The Jets”… B-B-B-before you get too excited, I’ll confess I just do not get it. But, boy oh boy, do some people love this song like it is their ANTHEM. That weird scene from 27 Dresses demonstrates my feelings for this song: This is not a sing-at-the-top-of-your-lungs-at-a-bar song, but Katherine Heigl still does it. With gusto. Nor is it all that great to dance to, but boy did JQH do it anyway, kind of awkwardly slow. People belt it and boogie to it because it’s Elton John and it’s wriggled its way into the zeitgeist to stay.

Some songs are good because they are good. Other songs are good because they remind us of good things. My friend Tyler started a new blog, and he wrote an extensive post outlining why “Don’t Stop Believin” just isn’t as good as we all think. (Go read it. Tyler is funny. He’s Springfield’s Chuck Klosterman and stuff.) And while I love this Journey crowd-pleaser, and am the first to just get down when Members Only plays it, I think he has a point.

In closing, my new life goal is to find myself in a montage set to “Saturday Night’s Alright for Fighting” at some point before I die. I don’t think that’s too much to ask. I’ve been in the same room with Elton John’s hands, after all.

Earlier this week, my friend Amanda introduced me (via facebook and then via email, bless her) to the tumblr “Writers & Kitties,” and boy is it a delight!

Check out this screenshot from the site archives (few internet moments give me quite the thrill of clicking into a tumblr archive such as this. Just look at it!) and see if you can’t spot Mark Twain & Meow Twains. 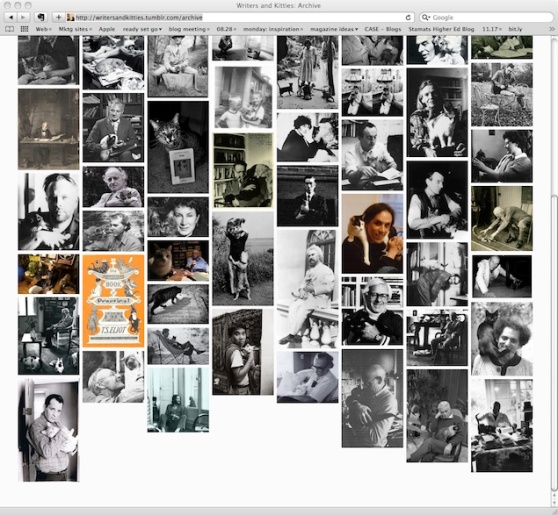 i want to go to there.

Aside from my customary affinity for all things cat, I love this site for the glimpse into the everyday, human side of these otherwise mysterious, splendid writerly lives.

I got to see (and talk to!) David Sedaris for the second time on Tuesday night. It was a great night for many reasons…
Candice is a fabulous hostess.
Arkansas Andy’s has RED VELVET CAKE concretes.
And DS was wonderful, too. His writing works best to the tune of his voice, so a live reading is magical. He holds a pencil the entire time, unobtrusively making notes based on crowd reaction.

People cheer for him like he’s a rock star. (A rockstar for bookish NPR nerds.) Of course he’s hilarious live, but it’s also nice to discover that he’s a REAL person. Who owns a pink tie and stumbles on his words sometimes and has a silver sharpie at the ready and tells dumb jokes and keeps a diary and writes and writes and writes. 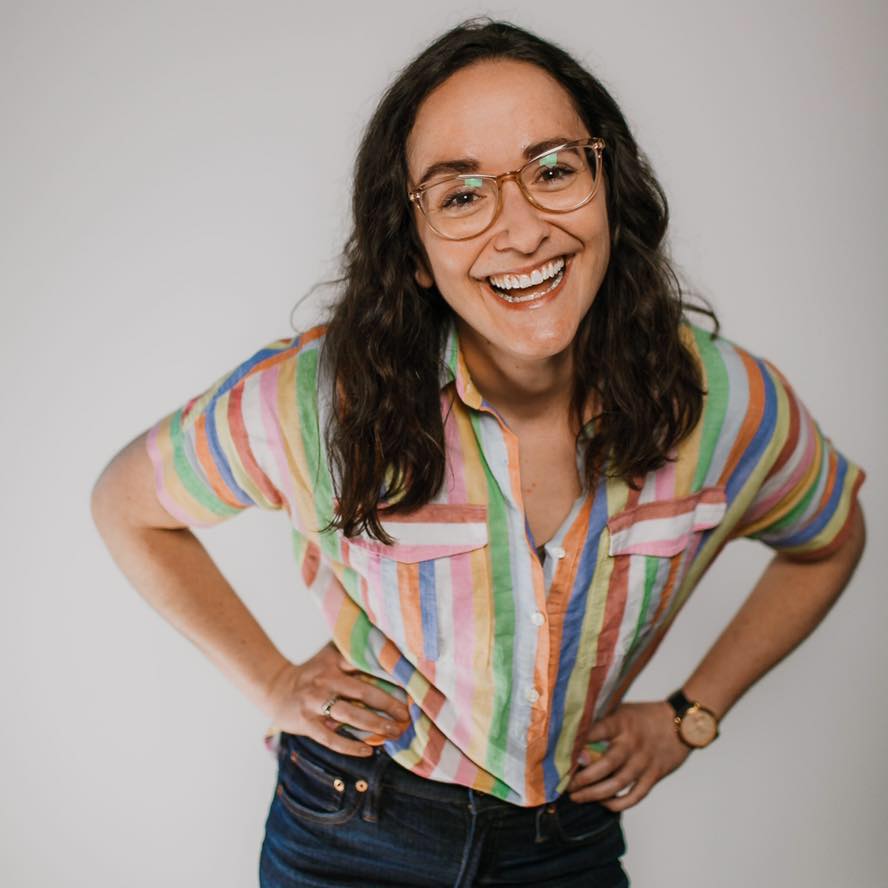 what sarah is tweeting

“we need to learn not simply to read books, but to allow ourselves to be read by them.” mark edmundson.